This article originally appeared on stuff.co.nz and is reproduced with permission

Winning has become not just a habit but of late a celebration for the suddenly irrepressible Blues in this Super Rugby Pacific season.

Leon MacDonald’s men lost All Blacks star Rieko Ioane early to what appeared a hamstring injury, but not anything in the way of form, momentum and confidence as they comfortably dispatched Brad Thorn‘s Queensland Reds to bank yet another bonus-point victory.

The eight tries to four victory was the Blues’ 11th on the bounce this season (one shy of equalling the franchise record), improving them to a competition-best 11-1, and 50 competition points. Ominously, they now have a seven-point buffer on their closest pursuers (the Brumbies and Crusaders), with the minor premiership all but sewn up with a fortnight remaining in the regular season. In case you haven’t been counting, that’s also 19 tries, and 124 points, in the last two matches against Australian opposition, after last round’s 71-28 dismantling of the Rebels. These guys are in some sort of attacking form – even if their defence might need just a little bit of attention.

It was another outstanding attacking display by the Blues, with the pack again laying an excellent foundation, and the backs having a field day with their speed and execution. Lock James Tucker continued his standout form with another big night (43m on the carry), Hoskins Sotutu unleashed his skills with four defenders beaten and replacement hooker Soane Vikena enjoyed the night with two late tries off the lineout drive route.

Beauden Barrett was excellent in the pivot and was one of three Blues’ backs to beat five defenders on the nights. Roger Tuivasa-Sheck continued his positive form with a team-high 72m (along with 5 defenders beaten, and one exhilarating clean break) and Bryce Heem’s two-try effort off the bench was notable. Caleb Clarke, too, continued his surging form with a brace of tries and several blockbusting runs.

The Reds toiled hard and showed some nice touches themselves to net four tries. Wing Suliasi Vunivalu, halfback Tate McDermott and lock Ryan Smith were their standouts. But they missed 32 tackles, and that’s just too high a number to have any chance. 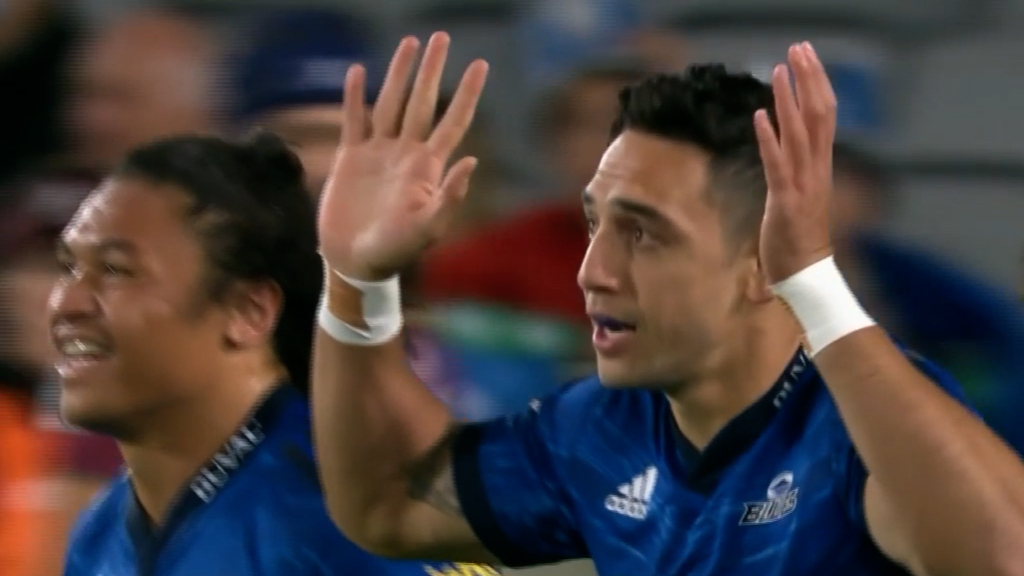 The Blues had opened at a point a minute through the first 17 minutes. A beautiful run on the cutback line from replacement midfielder Heem and an 82-metre counter-attack finished by Clarke from a ruck had put the home side out to 17-0 before the big crowd of 19,690 had fully settled in their seats.

But the Reds – down a few key troops, but not in spirit – were not going to roll over and play roadkill, as their mates from the Rebels had eight days earlier, and they scored two of the remaining three tries of the half to scrape back within eight (22-14) at the break.

Big wing Vunivalu, a one-time Auckland schoolboy star with St Kent’s, was a huge figure in the Reds’ response over the second quarter, notching an excellent try himself on the inside line off his halfback, and then setting up the score on the stroke of halftime for Smith when he skinned Clarke on the charge.

In between those two Reds’ seven-pointers Heem, who came on for Ioane after just 10 minutes, completed a brilliant stint with his second try when some exquisite handling from the Blues’ backs punished the visitors for an error on the carry in their half.

The Blues put the match on ice early in the second spell with two quick tries (to Clarke and Barrett), and after then it was only a matter of ensuring the bonus point as the tries kept coming. Replacement hooker Soane Vikena’s late brace and a nice finish by Stephen Perofeta ensured that.