One of the tries of the season from Waqa Blake has sparked the Parramatta Eels to a sensational comeback win which keeps the team’s top-four hopes alive.

Facing the Manly Sea Eagles at 4 Pines Park, the Eels trailed early in the second half but stormed home with the final four tries of the match to run out 36-20 winners.

Parramatta found itself in a six-point hole when Blake scored his wonder-try in the 55th minute after stand-in halfback Jake Arthur found him on the right wing with a terrific cut-out pass.

Even after receiving the ball, Blake had a mountain of work to do, as he flung himself towards the try line in the corner as Manly’s Morgan Harper tried desperately to push him into touch. 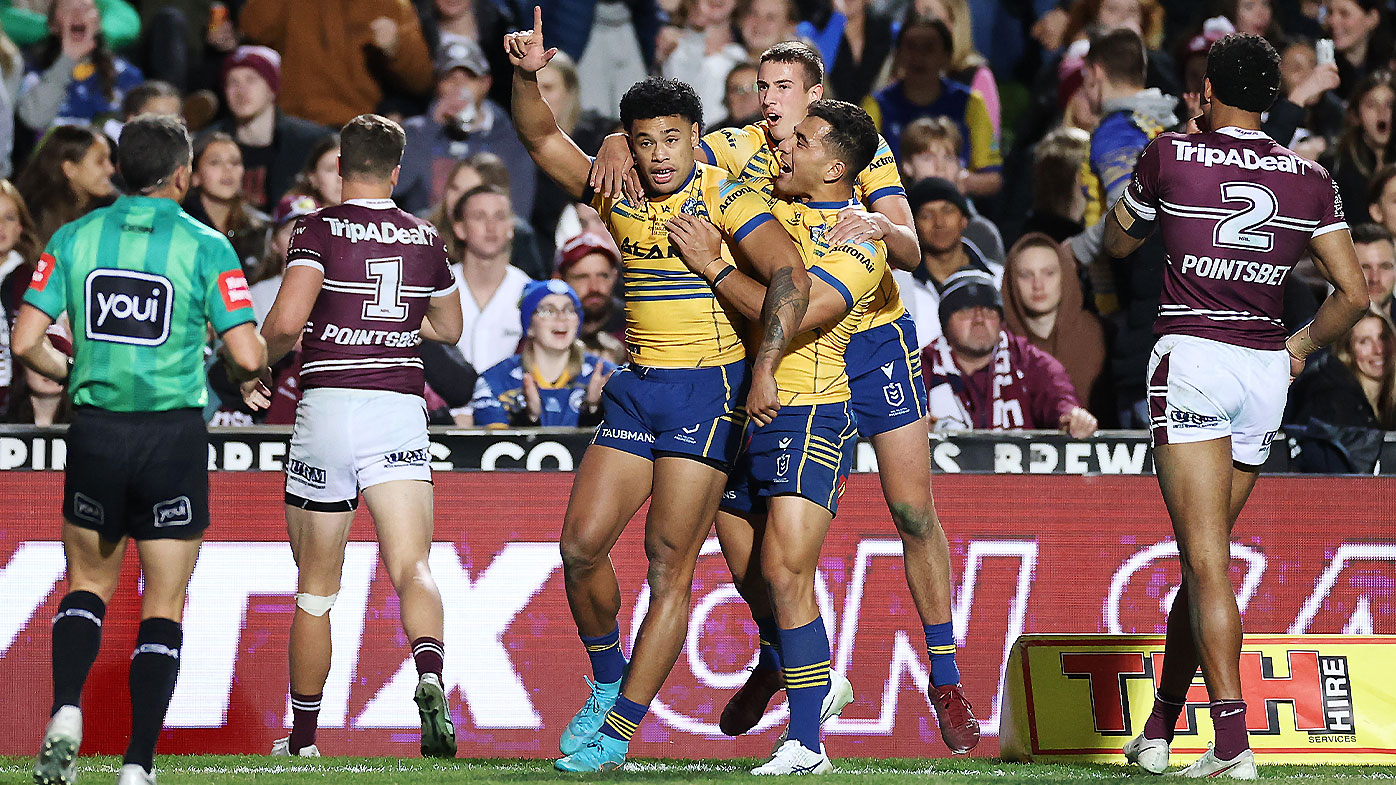 The 27-year-old managed to ground the ball with his right hand despite virtually the rest of his body being out of play, but suspended mid-air.

The try was described as “defying gravity” by Nine’s James Bracey after the match.

The rest of the commentary team, including Alanna Ferguson and Brad Fittler, were all left equally stunned at Blake’s sensational acrobatics.

“I know they train for it, but that’s just ridiculous. It’s just absurd because every other inch of his body was well and truly over the sideline,” Ferguson told Nine’s Macca’s Golden Point.

“I reckon he had to slam it because his body was going so quickly to the ground, so it had to be like a slam dunk. That’s clever,” Fittler added. 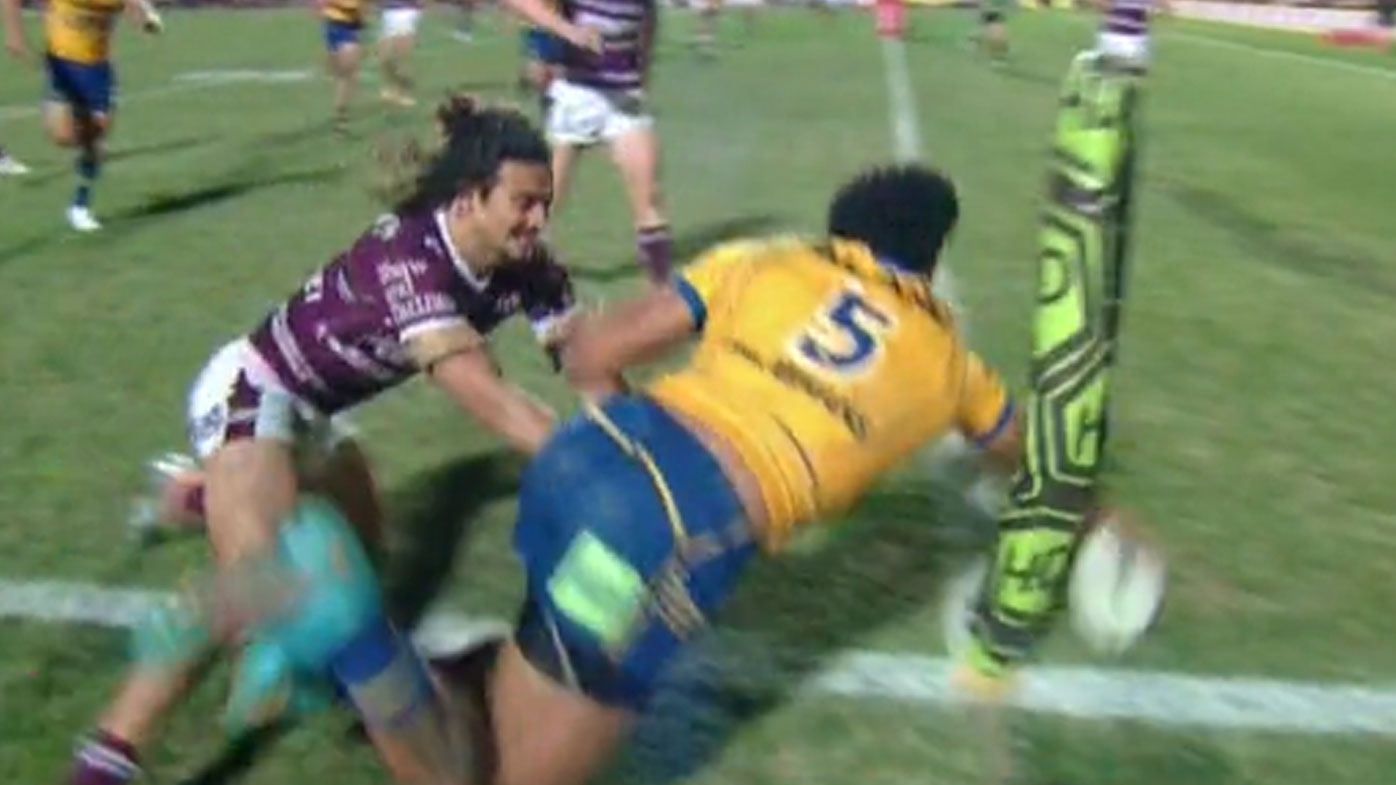 Incredibly, Blake was left unsure as to whether he’d grounded the ball in time as referee Gerard Sutton sent it upstairs to the Bunker.

“To be honest, it all happened quick. I actually didn’t think I got there,” the Eels star admitted after the game.

“Luckily enough I carried the ball with my right hand so just had to finish it off.”

The win could have massive finals implications for both sides, with the Eels rising to fifth on the ladder, equal on points with the third-placed Melbourne Storm and the fourth-placed Cronulla Sharks, who have a game in hand. 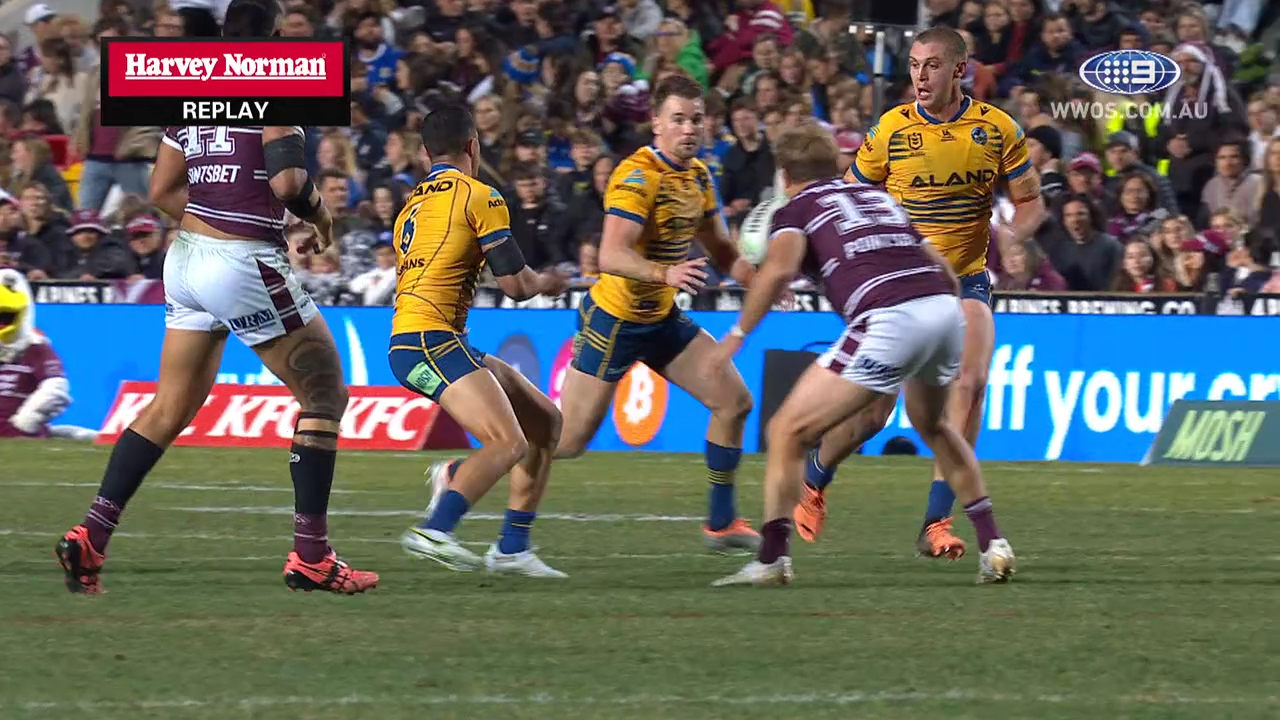 Manly’s loss is seemingly a death knell to its finals hopes, with last year’s semi-finalists remaining in 10th spot on the ladder.

To make matters worse for the Sea Eagles, influential playmaker Kieran Foran went off in the final 10 minutes with a left hamstring injury.

The 32-year-old is understood to have been bothered by the same hamstring in the lead-up to the match, and his participation in the remainder of the home and away season is in doubt.

Parramatta will face another top-eight opponent next weekend when it hosts South Sydney, while Manly will face the bottom-placed Titans in a bid to keep its faint finals hopes alive.