Essendon star Nick Hind has opened up about a piece of vision that was highlighted to prove Bombers coach Ben Rutten is on the outer with his players.

Rutten appears on the verge of being sacked, as the embattled club pursues legendary Hawks coach Alastair Clarkson, who is weighing up between the Bombers and Kangaroos.

On Footy Classified on Monday night, Kane Cornes showed a clip from an Essendon game last month which featured Hind seemingly ignoring his coach, as Rutten attempted to give him instructions on the sideline.

“You ask whether the players have checked out … I’m not sure I’ve seen vision of a player treating a coach like this,” Cornes said.

“He doesn’t want to sit next to Ben Rutten. Ben Rutten says, ‘No, sit here’. But, look, he’s trying to give him some feedback, some positive reinforcement, and the disengagement of Nick Hind on the bench here … he can’t even look at him.” 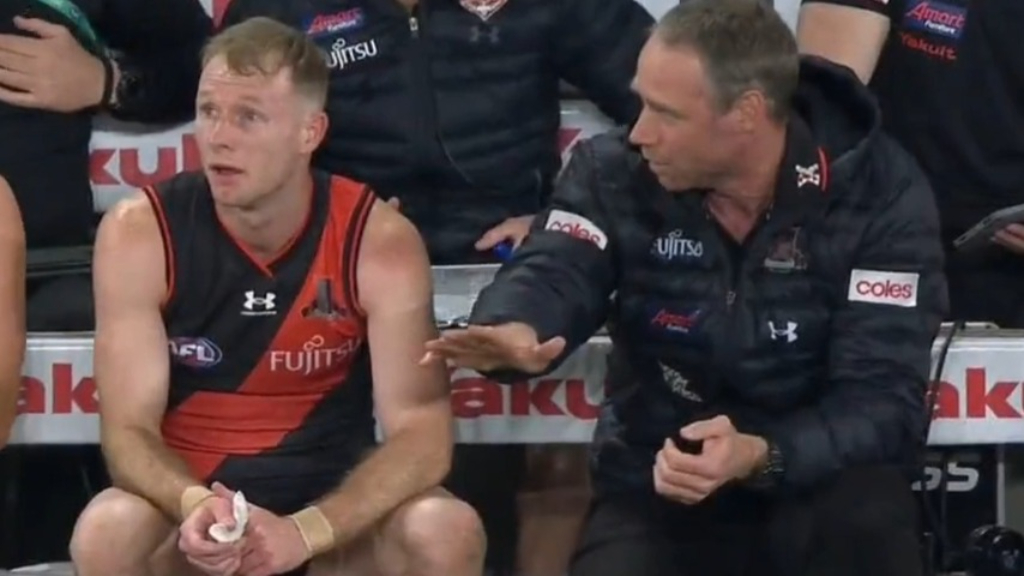 A number of journalists spoke to Hind as he arrived for training at Bombers headquarters on Tuesday.

He was asked about that specific incident and whether he had intentionally ignored his coach.

“I wasn’t ignoring him at all,” Hind said.

“I’d just been tackled pretty heavily and had come to the bench, and that’s really all there is to it.

“I was listening to him for sure. I’ve got a great relationship with Truck.”

Reports on Monday claimed Rutten will be sacked before the club’s final game of the season, against Richmond on Saturday.

That may yet happen, but as of Tuesday night he remains the head coach of the team.